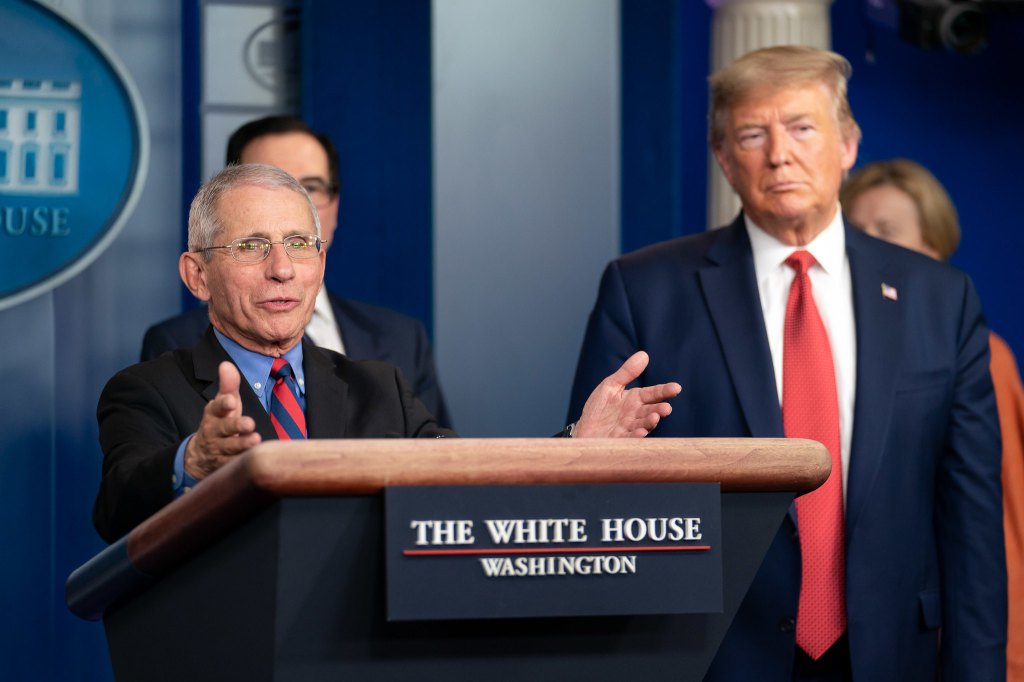 This week, Dr Anthony Fauci said that social media’s role in spreading disinformation has impacted the public’s response to COVID “more negatively than positively,” bemoaning the way incorrect information has a way of “self-propagating itself to the point where you don’t know what’s true and what’s not true.”

Unfortunately for Fauci and his scientific recommendations, the biggest proponent of disinformation lives in the Whitehouse, and is an avid user of social media.

According to a recent study from researchers at Cornell University, Donald Trump has been the largest driver of falsehoods involving the pandemic, with an analysis of 38 million pandemic-related articles across the world showing that mentions of Trump made up nearly 38% of the overall “misinformation conversation.”

It is a damning statistic, but not at all surprising, given that the President has from the very beginning of the crisis, continued to spew confusing, conflicting and untrue statements about the pandemic. He has consistently played it down, asserted that “it will disappear”, claimed that it was “contained” and even this week in a radio interview said that they had found the “cure”.

The constant barrage of misinformation has forced Twitter to actually censor the President’s feed, hiding his tweets that include suggestions that coronavirus is no worse than the common flu.

Trump has been pushing the comparison between the flu and coronavirus for a while, likely stemming from his unhealthy obsession with the Fox News channel. His favourite host, Sean Hannity, has been accused by researchers of playing down the pandemic on his show so much that he caused his viewers to disregard scientific warnings.

They say that the way he talked about the threat of the coronavirus resulted in greater numbers of COVID-19 cases and deaths, and highlight that misinformation early on in the pandemic had important consequences to the general population.

Indeed, this painfully dangerous narrative of playing down the pandemic has been a popular one for Trump and those on the right-wing. Him and his base have helped fuel conspiracy theories about the seriousness of the virus, with hashtags such as #Scamdemic and #Plandemic becoming popular, and the anti-mask movement remaining strong among Trump supporters.

Sadly, such politicisation from the beginning, as discussed here, have contributed to the deterioration of trust in Dr Fauci and the Centers for Disease Control and Prevention. A poll from the Kaiser Family Foundation shows how trust among Republicans for the CDC has dropped from 90% in April to 60% in September, while trust for Fauci among the same group has plummeted from 77% to 48%.

This loss of trust in institutions and experts is exactly what Trump has sought since he first ran for President, and the pandemic gives us the ultimate example of it in practice. He has contradicted Fauci and the experts at every turn, in an attempt to control the narrative rather than the virus.

Living on after Trump is gone

Nature spoke to several concerned experts about how Trump has undermined science and scientific institutions throughout his Presidency, and how the damage could take years to recover. Tom Frieden, who was head of the CDC under Obama lamented that, “The virus doesn’t respond to spin. The virus responds to science-driven policies and programmes.”

Elias Zerhouni, the head of the US National Institutes of Health under President Bush, said of Trump and his appointees: “They don’t really get the science. This is the rejection of any science that doesn’t fit their political views.”

Meanwhile, David Victor, a political scientist at the University of California, San Diego warned that “The Trump folks have poured an acid on public institutions that is much more powerful than anything we’ve seen before.”

“People can shake some of these things off after one term, but to have him elected again, given everything he has done, that would be extraordinary. And the damage done would be much greater.”

Such damage will live on, but it may also thrive on too, because even if Trump does lose the election in 2020, the influence he has among his base will remain, with his bolstered social media presence and aspirations for his own television network only serving to prop up and disseminate his alternative realities beyond his Presidency.

A new book called ‘Authoritarian Nightmare’ uses data from a previously unpublished nationwide survey, to argue that Trump has “tapped into a current of authoritarianism in the American electorate, one that’s bubbled just below the surface for years.” The data demonstrates a striking desire for strong authoritarian leadership among Republican voters, and “shockingly high levels of anti-democratic beliefs and prejudicial attitudes among Trump backers.”

The authors write: “Even if Donald Trump disappeared tomorrow, the millions of people who made him president would be ready to make someone else similar president instead.”

He may not be in power come 2021, but Trump will still be in a scarily strong position to battle the likes of Anthony Fauci in the media, and very little will stop him from continuing to be the largest driver of falsehoods on vital issues in the future.

Begin typing your search above and press return to search. Press Esc to cancel.